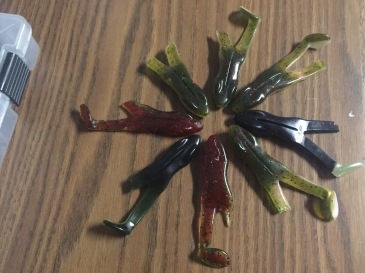 Anyone who’s used Ribbits have probably encountered instances where you get a topwater strike hoping it’s a huge bass, but find out later that it was a pike whom just bit off your soft bait’s leg. Living in central Wisconsin, pikes are common everywhere. It’s not uncommon to catch more pikes than bass in a day’s trip, and it can be annoying when you don’t have leaders on and you lose the hook as well. After awhile, I’ve learned that using one-legged ribbit works almost as well as when the ribbit wasn’t mutilated. So, next time you think about tossing your one-legged ribbit away, remember that the one-legged ribbit is still effective in creating a trail of bubble and sound to attract whatever lies underneath it.